This property, located at the mouth of Lake Pontchartrain, is a tremendous development opportunity.  Lying between Chef Menteur Pass on the south, and The Rigolets Pass on the north, with immediate access to the area’s famous fishing and hunting, re-development prospects are excellent.  Over 1,600+ acres of owned marsh island are part of this property, allowing for a private hunting club or mitigation bank opportunity.  An existing marina operating on Chef Pass’s property provides an additional base infrastructure to speed the development process.

The Passes at Pontchartrain lies in an area with a rich history.  The Rigolets was the international border between Spanish, French, and American Louisiana and British and Spanish West Florida from the 1760s through the early 1800s. Following the War of 1812, brick forts were built on both The Rigolets and Chef Menteur Pass to guard New Orleans against attack via Lake Pontchartrain.  Fort Macomb is across Chef Pass, while Fort Pike is just north of the marsh acreage bordering The Rigolets.

At Chef Menteur Pass, the oldest hunting and fishing club in the country, the Tally Ho Club, is a neighbor.  This club was founded in 1815.

The 610+ square-mile brackish estuary, Lake Pontchartrain, connects to Lake Borgne to the south through the Chef Menteur and Rigolets and brackets this property. The adjacent 25,000+ acre Bayou Sauvage NWR wraps around a large part of this property, so wildlife is abundant and unique, making for excellent fishing and bird watching. This ranch is rich in recreational opportunity with 2 miles of trout-filled live water, Elk, and other wildlife running the property, snowmobiling out the gate, and skiing within minutes. Additionally, Moose Creek Ranch provides optimal cattle grazing during the warmer months. There are no improvements, and the ranch is divided into several different parcels creating a blank canvas for a new owner with the potential of protecting the land with a conservation easement if one chose to do so. It’s a rare opportunity to own this Washington cattle ranch, located at the north end of Curlew Lake. Ten parcels have views of Lake Curlew and Mt. Elizabeth. The older ranch-style home with a full daylight basement with Curlew Creek running through the back yard for a peaceful, enjoyable setting with a large rustic barn nearby adding to the rustic ranch setting. This ranch has year-round access, with Highway 21 running through a portion of the property and county roads throughout. Wild lupine bloom in the spring and cover the rolling hills, cattle graze throughout the summer, and the elk are pursued in search of a trophy. This Bighorn Mountain in Wyoming property offers a large, protected block of deeded acreage. A log cabin on the property provides for comfortable, traditional rustic mountain living. While the name ‘Bull Camp’ refers to the area’s history of ranching and cattle, today the name can be applied to the elk and the sport of trophy bull elk hunting. This versatile ranch offers a fantastic getaway for those who truly enjoy seclusion, privacy, and the great outdoors conveniently located in Montana. Whether you are in the market for grass, an avid hunter, or just appreciate seeing wildlife in their natural habitat, this ranch is a beautiful mix of deep canyons, badlands, and prairie wilderness with unlimited potential. 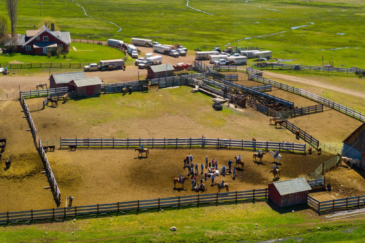 This Oregon ranch offers a discerning cattleman the opportunity to own this all-deeded, reputation cattle ranch. The ranch possesses significant agricultural production and excellent accessibility without sacrificing privacy or access to adjacent recreation and public lands. You will have to look far and wide to find an Oregon Ranch that matches this one! Deriving its name from a wild strawberry patch on the top of a towering bluff, this Colorado ranch for sale offers outstanding big game hunting or watching with an abundant number of species such as trophy elk, mule deer, black bear, and pronghorn antelope. It features a 4,013.45± deeded acres and 640± acre state lease parcel. One of the many features that make this ranch stand out is the valuable water rights, providing 275 acre-feet of water annually for agriculture and municipal use. This one of a kind property in eastern Tennessee lies at the junction of three mountain ranges and also has frontage on Chilhowee Lake. This mountainous property is surrounded by National Forest land, National Park land and other protected lands and would make an excellent candidate for land exchange. Fay Ranches is honored to bring this property to market. Nestled at the base of the continental divide in north-central Idaho, this ranch is one of the most scenic and prolific sporting ranches in the Rocky Mountain West. Comprised of 8,163± deeded acres and 65,486± leased acres, totaling 73,649± acres, the ranch is expansive, featuring 9.25± miles of the Lemhi River, a private, wild trout fishery, plus countless miles of spring creeks and mountain streams. This is a true river-to-mountain offering that has more miles of fishable trout water than any ranch we know of on the market today.