Greg Fay is a pioneer in the land brokerage industry.  When Greg founded Fay Ranches in 1992, it was initially called Fay Fly Fishing Properties.  Greg was the first to assign value to the recreational amenities of large agricultural ranches.  He began marketing ranches on a national and international basis to a new audience in the hopes that there were buyers who would also place a subjective value on the quality of the trout fishing or elk hunting on a given ranch.  This was a paradigm shift in the market.  Prior to Greg’s new approach, the value of a ranch in Montana was based primarily on its agricultural production.

Since 1992, Greg has transacted many millions of dollars in farms, ranches, and sporting properties and has successfully executed some of the most significant land sales and acquisitions in the Rocky Mountains.  With the support of his family and the help of many wonderful people along the way, Fay Ranches has grown to be the leading land brokerage in the United States, representing some of the finest land assets from Oregon to Florida.  Fay continues to lead the industry in the sale of sporting ranches but has also expanded its marketing to reflect the value drivers of land in the different regions of the US, including vineyards, timber, farms, and production ranches, in addition to hunting and fishing. Greg has also been an owner and manager of a productive farm/ranch on the Ruby River in Madison County, Montana since 1995 and has been intimately involved in the enhancement of a multitude of ranches over the years, creating ponds, wetlands, rehabilitating fish and wildlife habitat, and implementing sustainable agricultural programs. This combination of interests has provided Greg with a wealth of knowledge relative to the marriage of recreation and agricultural production, and he enjoys sharing this knowledge with his clients.  Developing and enhancing water features, wildlife habitat, and agricultural production can all increase both the market value and the owners’ enjoyment of the ranch.

Greg graduated in 1984 from the University of Colorado with a degree in English Literature and has been a full-time real estate broker since 1986. In his over 30-year career, Greg has built a reputation of being direct and honest with a wealth of knowledge in the land investment arena.

The youngest of seven children, Greg was raised in an entrepreneurial family in which a strong work ethic and integrity were combined with an importance placed on doing something you enjoy. Greg has been very successful in fulfilling this family creed.

An avid outdoorsman all his life, Greg has pursued his passion for fly angling in both fresh and saltwater and has enjoyed upland bird hunting and big game hunting for many years. His interest in fishing and conservation led Greg to join the board of Bonefish & Tarpon Trust, a fisheries conservation organization dedicated to understanding and improving habitat for these saltwater gamefish through science.

Greg is happily married and lives with his wife, their two sons, and their Llewellin Setter bird dogs in Bozeman, MT.

Nestled against thousands of acres of National Forest and 640± acres of State Land, the 600± acres of Castle Creek expands into an endless amount of big game hunting and additional recreational opportunities.

By Greg Fay, Founder/Broker, Fay Ranches and Jeff Boswell of Republic Ranches Virus-related lockdowns, economic devastation, prolific government spending, and social unrest have ushered in the new decade. Significant changes are happening at lightning speed, and trying to make sense of how this all ends is difficult and so far a bit counterintuitive. For families across […]

Rocky Mountain Runoff, What You Should Know

Provided by the team at Yellow Dog Flyfishing Adventures As springtime arrives in the Western United States, trout come to life in search of food. Some of the season’s best fishing conditions can be in late spring and early summer, but with high water and runoff, anglers are faced with a unique set of challenges. […] By Alex Lovett-Woodsum, Fay Ranches Editor Image provided by Bonefish and Tarpon Trust On Tuesday, August 4th, President Trump signed landmark conservation legislation into law, declaring the Great American Outdoors Act, “…a very big deal. From an environmental standpoint — and just a beauty of our country standpoint — there hasn’t been anything like this […]

Is Land the Great Insulator? | Interview with Eric O’Keefe and Greg Fay

An interview with Eric O’Keefe, Editor of The Land Report, and Greg Fay, Fay Ranches Founder Q: Regarding COVID-19, what do you see as the most impactful effect on the land industry? Eric O’Keefe: The importance of the keyword ‘home’ has been validated. Folks that thought about buying, but never pulled the trigger are now […] 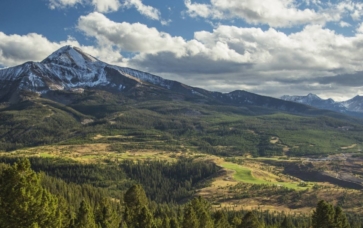 ﻿ Coast To Coast Properties to Escape | Social Distance | Fay Ranches from Fay Ranches on Vimeo. I hope you are all doing well and are safely sheltering in a pleasant locale. I am sitting on the porch of our home on the ranch we have owned with partners for the past 25 years […] It is unusual for two adjacent world-class ranches to come to market at the same time, but that is just what happened with the West Boulder Ranch and the Burnt Leather Ranch-Steen Place, nestled side-by-side at the base of the Absaroka Mountains in McLeod, Montana. Together, they comprise three miles of the West Boulder River […] Preparing a Farm or Ranch for Marketing and Sale

An article by Greg Fay, Fay Ranches Founder PREPARING A FARM OR RANCH FOR MARKETING AND SALE While most people know that a lot of work will go into preparing your house for sale in the residential real estate world, it is an often neglected aspect of preparing a ranch for sale. Homeowners will paint kitchens a […] Fay Ranches Friends and Family,   Despite the ongoing volatility of the stock market and the unprecedented social changes we’re experiencing, the land brokers at Fay Ranches are reporting sustained interest in the land market.  Our conversations with land investors indicate this is due in part to the COVID-19 pandemic, as well as the stability of […] The Effect of COVID-19 on the Land Brokerage Industry

By Greg Fay, Founder, Broker, Fay Ranches Inc. Many of us are wondering what the impact of the Coronavirus will be on the global economy and our communities.  We can only guess if this will be a phenomenon that has a lasting impact or will pass us by in a matter of weeks. We are […] Contact: Rachel Frost, 406-994-3724 or frost@montana.edu   “The success of the Dan Scott Ranch Management Program is dependent on a close relationship with industry and ranching partners, such as Fay Ranches. Without the ranching community’s participation and support of the program, we cannot provide the educational experience that will prepare students to meet the challenges facing tomorrow’s […] an article by Greg Fay, Founder/Broker, Fay Ranches & Jeff Boswell, Partner/Broker, Republic Ranches   How much should I ask? Who do I talk to?  What should my strategy be?  One of the most challenging aspects of selling your land is knowing how to price it. The process of selling land is more often derailed […]

Written by: Greg Fay, Broker/Owner Tom Brokaw’s West Boulder Ranch, nestled at the base of the Absaroka Mountains in south central Montana, and the neighboring Burnt Leather Ranch-Steen Place, owned by the Reid family for over 60 years, are both for sale. They are both incredible properties, and combined, they represent an opportunity to assemble […] Some companies do rope courses or escape rooms for their team building, Fay Ranches and Republic Ranches go fishing!  With the help of Yellow Dog Flyfishing Adventures, 12 anglers from these powerhouse land brokerage firms spent 4 days fishing for giant redfish in the Louisiana Marsh this past week at the Dogwood Lodge.  “It was […] by Greg Fay, Broker/Owner, Fay Ranches The Ruby River Ranch is located on a stretch of water that I’ve known intimately for the past 22 years.  When I began fishing it, it was a good fishery.  In the past 20 years, it has become a great fishery.  Upstream of the ranch are two spring creeks […] Greg and Sam Fay joined long time clients and friends Bill Nutt, Bill Legg and Nelson Sims at the Highland View Ranch for the Montana Pheasant hunting opener this past Saturday.  It was a beautiful day with some great dog work, some wiley pheasants and good cheer had by all. The Highland View Ranch combines […]

Selling Your Land: How to Prepare & What to Expect

Written by: Greg Fay, Founder of Fay Ranches Article to be featured in the next issue of Land Investor Magazine August 2016 marks my 30th year selling land.  I’ve been involved in some of the most significant land transactions in several states, including farms, ranches, timber and plantations.  This article is about preparing your ranch […] CONSIDER TAXES & FINANCIAL PLANNING The first and most important step in selling your ranch is making sure your family’s tax and financial planning is current and competently prepared.  This is particularly important for multi-generational ranch families.  I say this because they are the most likely to neglect this stage.  Modern ranch owners, who have […] Selling Your Land: Preparing Your Ranch for Show

As you contemplate selling your ranch, it is important to have an understanding of the process ahead of you, and to prepare your ranch to be as attractive as possible to potential buyers.  This often involves cleaning up the junk.  Ideally, this begins prior to putting the ranch on the market.  For many ranch owners, […] Selling Your Land: Deciding on a Brokerage & Choosing a Broker

DECIDING ON A BROKERAGE Once you’ve assessed your property, you’re ready to decide on which brokerage company to work with.  If you have a ranch (or a farm, timber tract or plantation), don’t list with a company that sells residential or commercial real estate.  Instead, work with a company that only sells land.  As a […]