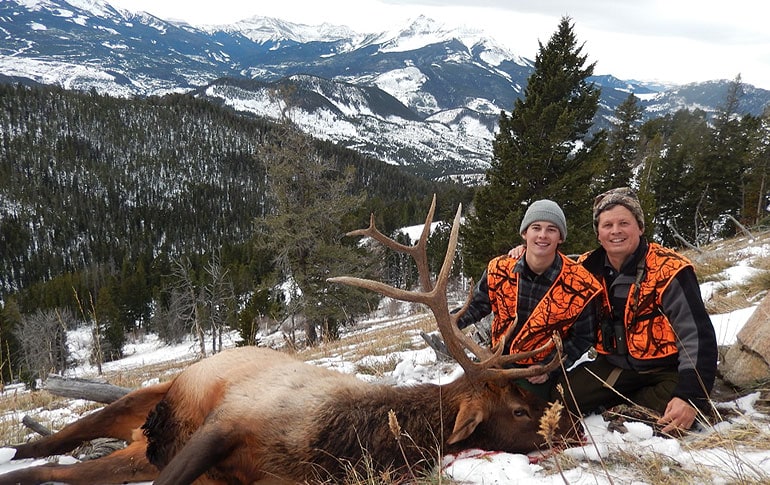 Our 2015 hunting season had several wonderful highlights and a couple of disappointments.

Jon’s 14-year-old granddaughter, Megan, came in June for her very first big game hunt. She shot a spectacular 250 lb. cinnamon-colored black bear on the first day of her hunt. She was a bit nervous but made a perfect 100-yard downhill shot. Jon’s grandson Jonathan, 13, came elk hunting with his dad over Thanksgiving. We saw a number of elk, two that would have scored over 375” but just couldn’t get close enough for a good shot. He did shoot a nice whitetail to go with the mule deer he shot last year. In early November, we had Randall, a disabled boy from Bozeman, come with his Dad to hunt deer or elk. He was confined to a wheelchair, so could only hunt from the truck. Fortunately, there are miles of logging roads on Elk Meadows Ranch, so we could cover quite a bit of territory. We spotted several nice elk the first day, but they were just too far away for him to shoot. On the second day, both he and his dad were able to shoot a mule deer buck. It was a goosebump moment! Next was Montana’s U.S. Senator, Steve Daines, and his son Michael, a student at MSU. We spotted a nice bull the evening of their first day up high in the Lee Metcalf Wilderness. Early the next morning, we hiked about 2 miles up a trail from the ranch and spotted two bulls fighting. By 8:30 a.m., after a careful stalk, we were within 200 yards. Steve shot first, and within seconds Michael took his shot. Two bulls down, and the work started! We got home at 6:30 p.m. that evening. 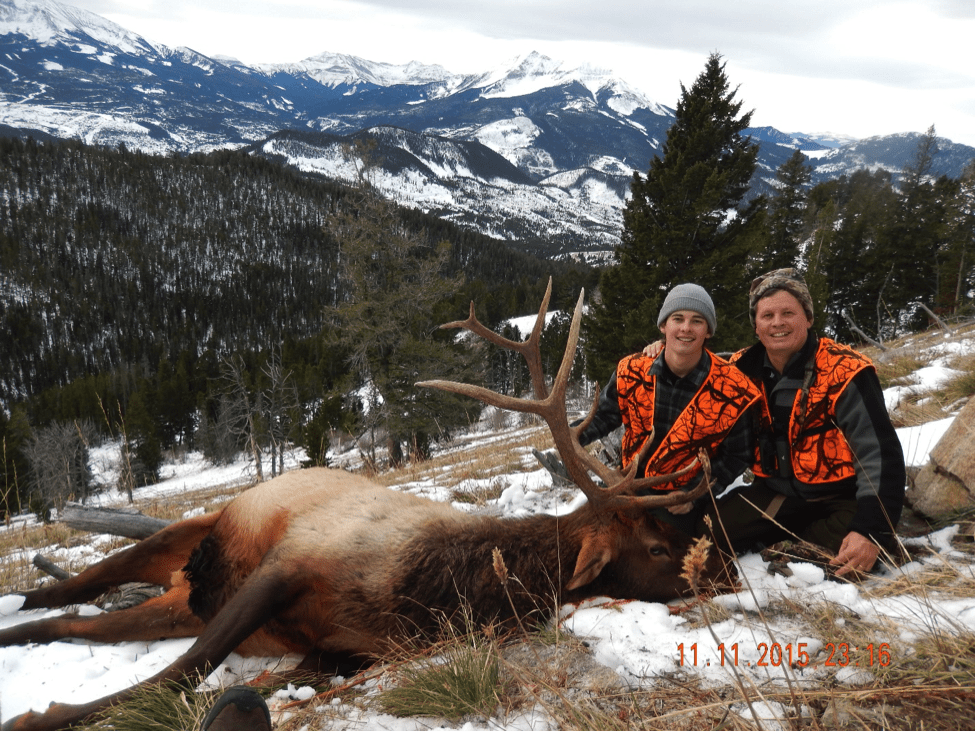 All summer and well into the fall, there were two huge bulls around our house. One was well over 375”, and the other was nearly as big. All archery season, Jon tried to ambush them but never could find either one, even though they were seen near the house many times.

During rifle season, Siri had the opportunity to shoot the biggest one about 10 yards from the hot tub but just couldn’t bring herself to do it in our backyard.

During Thanksgiving week, Jon’s son stalked a bull within 200 yards behind Elk Meadow’s Main House, but the shot was just too far for his bow. The next day Jon & Siri were within shooting distance of both of them but passed, so Jonathan might have a chance. Unfortunately, they eluded him.

So Jon and Siri were unsuccessful with the monster elk, and Siri hunted for a huge non-typical mule deer to match the one Jon killed with his bow a few years ago that scored 208 P&Y.

All in all, it was a very rewarding season.

About Elk Meadows Ranch
The 1,501± acre Elk Meadows Ranch is not only a stunningly beautiful and private recreational ranch, but it is also a great real estate investment, a superb elk and deer hunting ranch, and a gathering place for friends and family. It is virtually impossible to find a world-class ranch within minutes of a world-class ski resort, and this unique quality makes it rare in an asset class built on its lack of supply. Elk Meadows Ranch is in close proximity to Spanish Peaks Mountain Club, The Yellowstone Club and just 12± miles from the Six Shooter ski lift at the Madison Base Area of Big Sky Resort. This location contributes to the attractiveness of the ranch as an investment, particularly right now with the Big Sky market booming. However, once you own the ranch and begin enjoying every aspect of it as well as the fly fishing on the Madison River and the many restaurants, golf courses and festivals in Big Sky and Ennis, you’ll forget about the investment quality of the ranch because you’ll never want to sell. Learn more about Elk Meadows Ranch.

About Fay Ranches
Fay Ranches has been providing brokerage and advisory services for the acquisition and sale of significant land assets since 1992. While not forgetting our roots as a recreational land company, we have expanded our focus over the past couple of decades to include large, productive farms and ranches as well as timberland and plantations. We can be found coast to coast as well as in select international markets.