Robert Martin is a Ranch Broker in New Mexico and Colorado. He grew up on the family farm in Curry County, near Clovis, New Mexico. His great-grandparents were homesteaders in Curry and Roosevelt counties, and his grandfather ran the horse auction in Clovis for fifty years. Robert attended Texas Tech University and received a bachelor’s degree in petroleum engineering. After working for ARCO Oil and Gas in Midland and Odessa, Texas, he returned home and managed the family farm for fifteen years. Watching the Ogallala Aquifer decline rapidly over those years, Robert and his father made the difficult decision to sell their irrigated farm while it was still highly productive. When the farm sold in 2000, Robert followed his childhood dream and went back to college, earning a master’s degree in biology from Eastern New Mexico University.

Robert worked as a wildlife biologist on research projects in eastern New Mexico and later became a high school science teacher. He went on to join the staff of The Nature Conservancy in 2008, as a Stewardship Ecologist. His duties at TNC included land stewardship, conservation easements, wildlife education, wetland restoration, government programs, energy issues, amphibian conservation, and landowner outreach.

Robert’s love for native wildlife and the outdoors has always drawn him to the West’s rivers, streams, playas, and riparian areas. This attraction is part of what led him into ranch sales. Robert’s background in wildlife biology, coupled with his extensive farm & ranch experience, gives him an excellent foundation from which to optimally manage wildlife habitat or a holistic working livestock operation. His experience with farming and ranching allows him to take a skilled, hands-on approach to land management. Robert is exceptionally familiar with government assistance programs available from NRCS and USFWS, as well as conservation easements and their tax incentives. He considers these useful tools to help landowners become better stewards. Robert joined his friend and business partner, Greg Walker, in founding Walker & Martin Ranch Sales in 2014. With his keen interest in wild places and experience as a real estate investor, this has been a natural fit. Robert lives in Santa Fe, New Mexico, and he and Greg primarily sell ranches in Northern New Mexico and southern Colorado. The team recently joined Fay ranches in October 2020 to expand their marketing platform to benefit their clients.

Robert is driven by his love for the wildlife, landscape, and people of the southern Rocky Mountains. His passion for the outdoors is evident every day in the way he conducts his real estate business.

Friends since early childhood, Greg Walker and Robert Martin  have owned and operated a working cattle ranch together in Guadalupe County, New Mexico, since 2004. Their ranch is enrolled in the Conservation Stewardship Program, much of which focuses on the restoration of aquatic and riparian wildlife habitat on over five miles of the Pecos River.

When it comes to discussing recreational value, Greg and Robert have been hunting, fishing, and exploring the backcountry of New Mexico and Colorado their entire lives. They really get it! Beyond a shared attraction to the Southwest’s most fascinating places, they share solid character traits and work ethics. Doubly robust when combined, their personalities and backgrounds make them very effective ranch brokers. This big New Mexico cattle ranch offers an abundance of grazing with large-herd-carrying capacity along with exceptional Big-Game Hunting. Rated to carry 580 cow/calf pairs, hunting opportunities include elk, mule deer, antelope, and free-ranging African Oryx! Characterized by gently rolling hills with distant purple mountain views, the ranch is 55% deeded, with State and BLM leases bringing down the price-per-animal unit. New Mexico taxes are low and made lower by ag exemptions. Rancho San Ignacio is a classic Northern New Mexico ranch at the base of the iconic Hermit’s Peak, the adobe hacienda compound frames a spectacular backdrop. The sprawling property combines a rich history, irrigated meadows, well-managed forests, and abundant wildlife. The trout-filled Sapello River runs for two miles through the property. The murals in the bunkhouse are incredible. All this lies under the dramatic backdrop of the iconic Hermit’s Peak. Rancho San Igancio is truly unique! This rich New Mexico oasis in the rugged Glorieta Mesa area offers dramatic canyons, coniferous forest, essential springs, and abundant wildlife. Direct access to the Santa Fe National Forest provides an exceptional opportunity for hiking and horseback riding. The stunning adobe hacienda is an ideal place for relaxing with family and friends. Enjoy fishing on the nearby Pecos River, skiing at Ski Santa Fe, and the fine dining and culture of downtown Santa Fe, a mere 45 minutes away. This New Mexico grazing operation includes the cattle. A local good neighbor rancher runs the grazing and owns one-third of the cattle. The other two-thirds of the herd is included in the price. Large deeded acreage has purple mountain views. Furnished three bed, two bath, brick house with fireplace and swamp cooler. Headquarters has a hay shed and a 6-stall horse barn. The ranch has two wells with new pumps and a water storage distribution system. Big game hunting for antelope, deer, elk, and oryx. Romero Hills Ranch is an opportunity to own acres of pristine forested land in one of the most desirable areas of Northern New Mexico. Enjoy abundant wildlife, hunting, hiking, and horseback riding. This ideal location is close to nearby skiing, canoeing, and fishing opportunities with amazing views of Hermit’s Peak and the charming Mora Valley. Easy year-round access from a state highway makes it conveniently located near Taos, Las Vegas, and Santa Fe. What a perfect spot to build your dream mountain home. Wild yet accessible, this Colorado ranch offers unique fishing for brown trout and northern pike on 0.75± miles of the Rio Grande River. A private (shared) trailhead provides river access into the gorge. It adjoins BLM land to the west and the 243,000± acre Rio Grande del Norte National Monument to the south. Deer and elk traverse the property, providing an excellent opportunity for hunting. This large, private river parcel is a rare find and presents the buyer with a conservation opportunity. 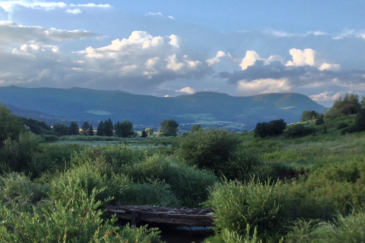 This charming Mora Valley, New Mexico property has a one-of-a-kind, well-designed, red iron steel building situated between a state-maintained road and the riverfront. It offers over 5,700 SF of heated living space plus an attached 3-car garage. This house lays the groundwork for your custom choices for a beautiful, solid, open-style large home on the Mora River in the pristine Chacon Valley. This Mora River property offers the most stunning views in northeastern New Mexico among its forest, meadows, and over 1,000 ft of river frontage on both sides. Nowhere in the Southwestern US will one find a more productive combination of farm & ranch at this kind of price, and with New Mexico’s low property taxes! An incredible amount of water is attached to this farm. An abundance of grazing with large-herd-carrying capacity makes up the range lands, with the price-per-animal-unit being lower thanks to State and BLM leased lands. Both properties are wildlife strongholds with biodiversity that lends itself to activities ranging from trophy big game hunting to some of the finest birdwatching in NM. This premier ranch for sale in New Mexico is a unique opportunity to own and protect a rugged and wild part of the American West. Teeming with wildlife, this is a great hunting property with unlimited landowner elk tags. It offers An exceptional location for private horseback rides and private hikes along the Canadian River and canyon rim. This beautiful ranch is ideal for exploring, artifact hunting, bird watching, and wildlife viewing. New Mexico’s private riverfront ranch has two miles of Pecos River running through a scenic canyon with access via a rare road to the river bottom. There are off-grid cabin sites with spectacular views. The river forms nice pools around giant boulders and is lined with mature cottonwoods. Dramatic side canyons also hold spring-fed pools in their bottoms. This is beautiful canyon-edge grass-country interspersed with Mesquite, Pinon, Juniper, Oak, and Cottonwood accented with rock formations.