Stonegate is comprised of 35± deeded acres and borders over 17,000 accessible BLM acres. The property is spectacularly situated between the Great Snowy Range and the Sierra Madre Mountains and in close proximity to the towns of Encampment and Saratoga, Wyoming. The beautiful Encampment River is within 10 minutes of the property and is regarded as one of the finest native “Blue Ribbon” fisheries in the western United States, providing entirely private fly fishing, as well as other recreational uses. The Encampment River was meticulously described in Ray Bergman’s famous book, Trout, published in 1937. The pools, rocks and eddies that Bergman described still exist and are the best pools on the river today.

The diverse recreational amenities and agricultural assets of Stonegate far exceed those of other properties of its size. A lush 24± acre irrigated hay meadow serves as an ideal habitat for a population of deer, pronghorn antelope and a variety of other wildlife. The road to the main residence crosses the former railway bed of the Saratoga/Encampment Railroad, which transported copper from the Encampment mines in the late 1800s and early 1900s.

The main residence has been expertly constructed with large logs and stone. The ranch also features a barn outbuilding with a concrete floor and a tack room with timber frame construction. This sale represents the debut of a very special and private property which has only been seen and experienced by family and close friends of the current owners. 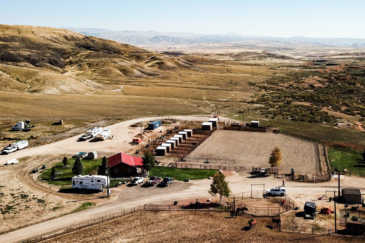 The Broken Spoke Ranch offers a small, secluded ranch, equestrian operation, or a recreational getaway. It has nearby hunting and fishing, winter sports, UTV, and camping opportunities in the nearby Big Horn Mountains in Northwest Wyoming. The ranch provides two homes and a large shop with plenty of scenic views and privacy. The turnkey horse operation will give the horse owner the ability to practice competitive events or trail rides through the BLM and nearby Cloud Peak Wilderness. Ideally situated high in the Black Hills of Wyoming, this ranch offers breathtaking views of Inyan Kara and the Bear Lodge Mountains; on clear days, you can see the Big Horn Mountains! This recreational paradise offers an abundance of opportunities for the great outdoors or to run a smaller agricultural or equestrian operation. A newly constructed timber frame home features Amish precision craftsmanship encompassing over 8,200+ square feet of living space, including an attached heated garage.